I used to have the Dell Mini 9 that came with Linux (Ubuntu 8.04). As soon as I got it, I paved it and installed Ubuntu Intrepid instead. It worked like a charm. Then I decided to sell my Mini 9 and upgrade to the Mini 10. The Mini 10 is a better machine in terms of hardware, and is MUCH better in terms of screen resolution and keyboard size (best keyboard on any netbook).

So, the Mini 10 ships with Windows installed. Since I had such good luck with the Mini 9, I figured a Linux install would be a breeze. So with my shiny new Mini 10 netbook, I tried an install Ubuntu Intrepid. It worked great but no compatible graphics driver. OK, so I waited for the Ubuntu Jaunty release and then promptly installed that. Same prob.

Here is the deal: There is no Linux driver for the graphics card it uses (Intel GMA 500). So.. if you want to run Linux on it, your only choice is to run in a non-native resolution using the default driver. This totally sucks.

There appears to be a native Linux driver somewhere (Poulsbo), but it doesn't work right now and is not packaged.

I am just running Windows for now and waiting for a real native driver to be released. Shame on Intel for not providing one. 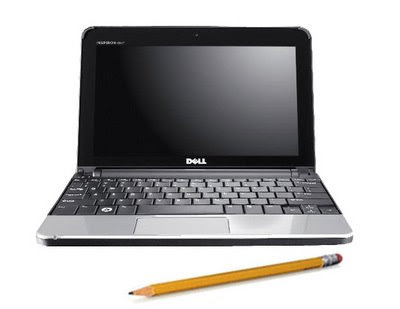 Shame on Intel, and shame that i didnt read this one week ago!!!!! but i prefer to use linux like this than using windows :S:S.,

The http://www.h-online.com/open/Upda... website tells about the updated "intel" driver in Ubuntu.

GMA500 / Poulsbo is a "psb" driver, so this update doesn't help those Linux users who are unfortunate enough to have such hardware...

Dell is promising an Ubuntu version of the Mini 10, so there should be drivers soon. http://en.community.dell.com/blogs/direct2dell/archive/2009/05/07/Ubuntu-Now-Available-for-Mini-10-Customers-in-the-United-States-and-Canada.aspx

yes I read that. Hopefully it will be a driver that works with the latest Ubuntu versions (Intrepid and Jaunty). I have a feeling they are gonna release the Mini 10 with Ubuntu 8.04.

Watch this: Mini 10 with Ubuntu:

which I supposed comes direct from Dell:

and this tutorial on how to install:

thanks buddy for the information and thanks to all who resolved the problem of installation problem..as after reading the article i decided not to buy it..but the comments show that it should be tried ones